by steven
in Crimes
0

Caroline Kangogo, a fugitive police officer sought for murder, is said to have killed herself in her parents’ house in Nyawa, Elgeyo Marakwet.

The horrific ending to the case of a murderous policewoman who made headlines after killing two men and escaping police dragnets has been revealed by Rift Valley Regional Police Commissioner George Natembeya.

According to Natembeya, Corporal Kangogo shot herself in the head inside her mother’s bathroom. 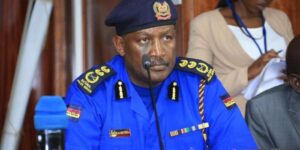 Officers responding to the call raced to her residence, where they discovered a pistol suspected to have been used in the murders of two men in Nakuru and Kiambu counties.

She was observed entering her parents’ home early Friday, according to sources, and was subsequently discovered dead inside an open bathroom.

It’s unclear whether she managed to communicate with any of her family members before committing suicide.

A photo that went viral on social media showed a lady clad in black trousers, a mustard sweater, and a black veil concealing her face sat on a pool of blood on the floor of a restroom, which police have since verified is Kangogo’s.

Her knees are crossed, and a handgun is slung over her left arm.

Since committing the murders, detectives think she has traveled through at least six counties, managing to elude capture despite a posse of security personnel on her tail.

Her most recent sightings were on Thursday in Eldoret and subsequently in Kericho, when her phone signal was picked up; it is thought that she used another person’s phone to call a friend while riding in a PSV van.

Detectives think she went to Kisii in search of her next victim, a doctor.

Her phone signal was also tracked to Iten, Elgeyo Marakwet, where she was born and raised.

Steven is a lifestyle and current affairs blogger with over five years of experience in digital media.

A woman from Nakuru was discovered dead, her private parts gushing.

Man catches wife in Act Stabs’ Her to Death

Kalonzo to join hands with Mudavadi

From Eating Ugali to a millionaire

News you will never get from ODM Bloggers – Raila was booed in Vihiga.